This vegan bread pudding has a crispy golden crust covering a tender, gooey inside that is lightly sweetened by maple syrup and spiced with cinnamon and nutmeg. 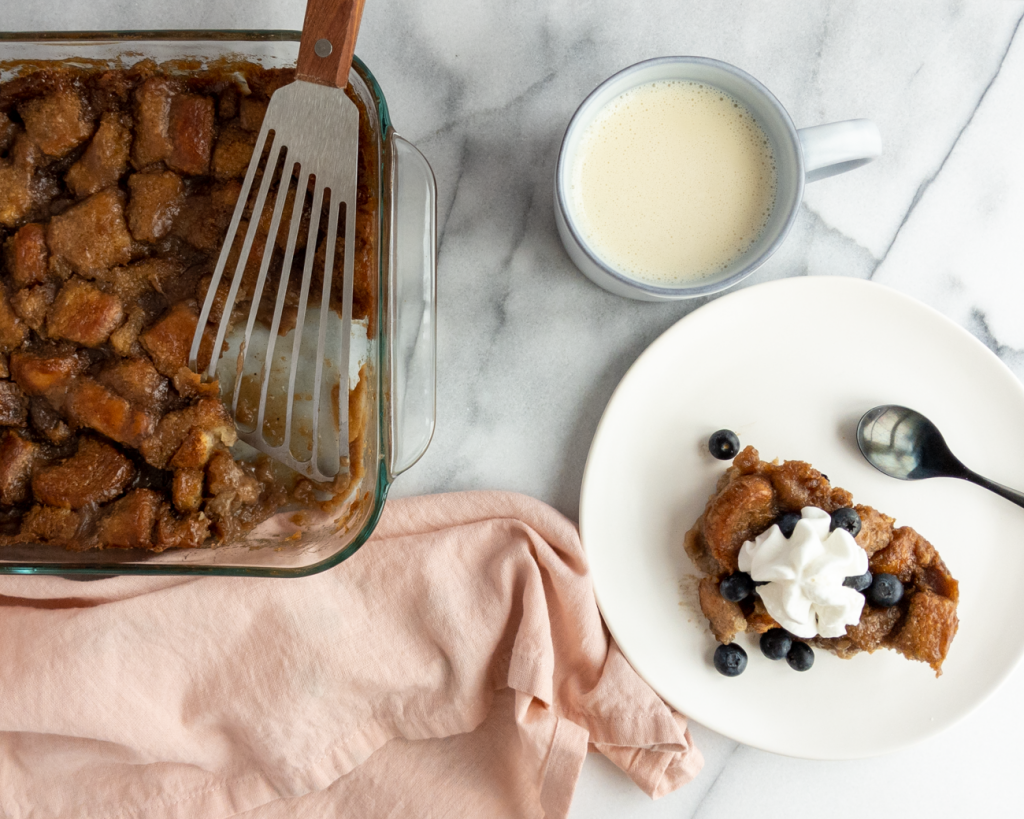 How to Make Vegan Bread Pudding

My grandma used to always make an amazing Challah bread pudding when we visited for Thanksgiving every year. I’d wake up on Saturday morning to a house filled with the sweet and warm scents of cinnamon, maple, and brown sugar goodness.

Of course, her version used half-and-half and about a million egg yolks to make the rich, baked custard. I’ve been chasing that high, looking for a way get to make a rich bread pudding vegan, without using any animal products. 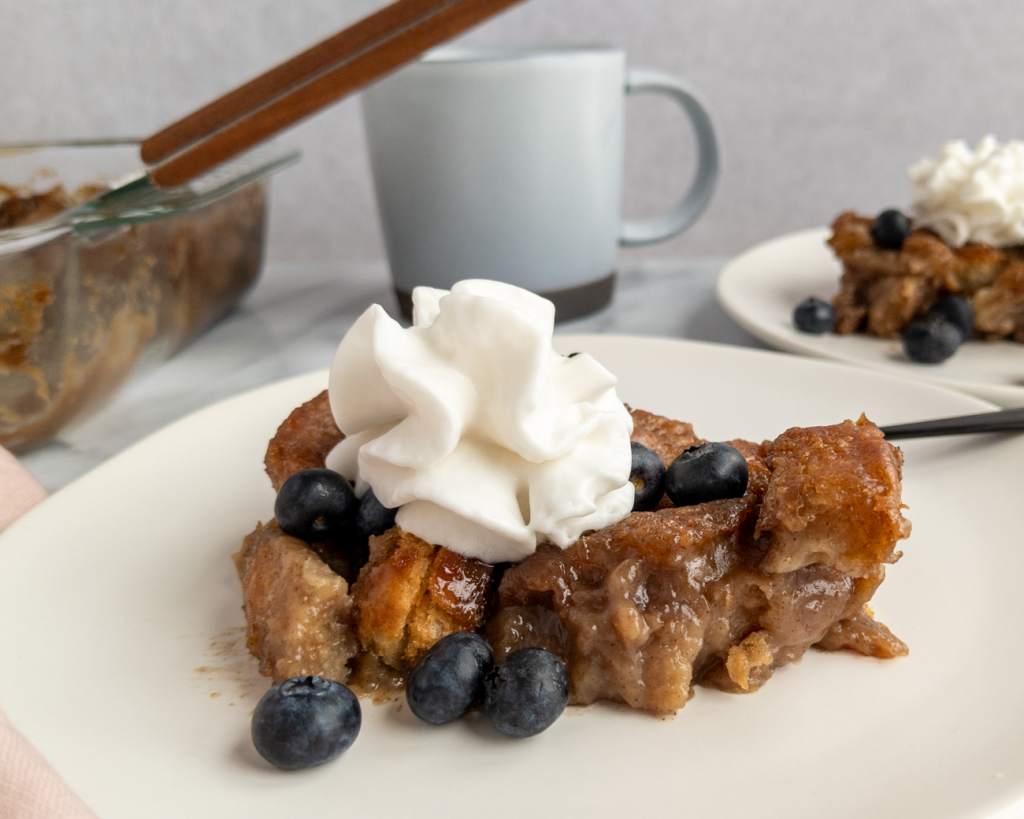 The gooey custard for this delicious vegan bread pudding is sweetened with maple syrup and spiced with vanilla, cinnamon, and just a bit of nutmeg. It’s wonderful to bake in the winter and makes the whole house smell amazing.

Extra butter and brown sugar go in the topping, which you can fill with raisins, walnuts, pecans, or whatever fits your fancy. And that all bubbles together into an amazing soft sticky pudding. 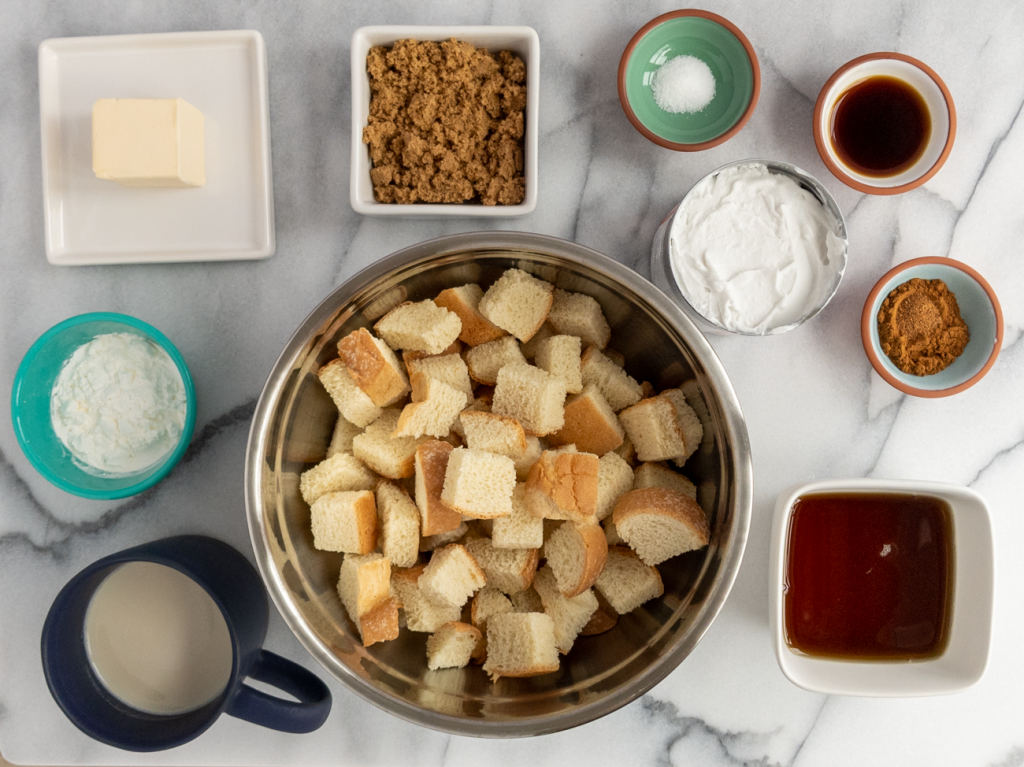 I tried making vegan bread pudding with a couple of different egg substitutes. Ground flaxseed thickened well, but it left too much texture in the pudding part. I need a sauce that was smooth and luxurious, and not gritty or speckled.

Could you just leave out any thickener? This works surprisingly well for many recipes! Sometimes those added eggs don’t actually add much.

Unfortunately, it didn’t work for vegan bread pudding. Without any thickener, the sauce became a thin, soupy liquid left in a puddle in the bottom of the pan. I need a thick custard that can hold it all together.

I finally settled on good ol’ cornstarch. It’s what I make my regular egg-free pudding out of. It’s smooth, and easily thickens any liquid, and doesn’t add any taste after it’s cooked.

The only downside is that you have to heat it up over the stove (before you bake the bread pudding) to thicken the sauce. So, one extra step, but it’s totally worth it. And it’s still easy to make!

Okay, so, before you scroll down to the recipe, here are some of the most important things I’ve learned to make the perfect vegan bread pudding: 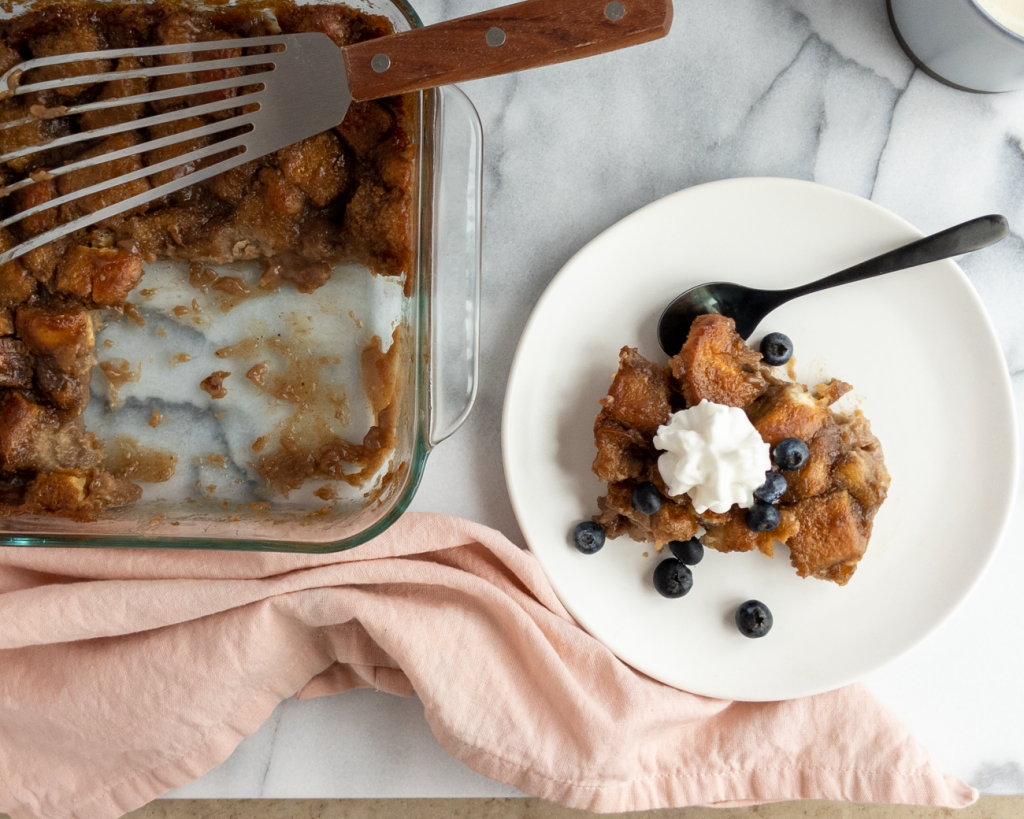 How to Make Stale Bread

You’re supposed to make bread pudding when you have some old bread you need to use up. Some people store the heels and leftover bread bits in the freezer until they’ve accumulated enough for a batch. It’s a fantastic use for bread that might otherwise be discarded.

But me? I don’t always plan ahead. Sometimes, I want bread pudding now, and all I have is fresh bread.

There are two ways to make stale bread for vegan bread pudding: 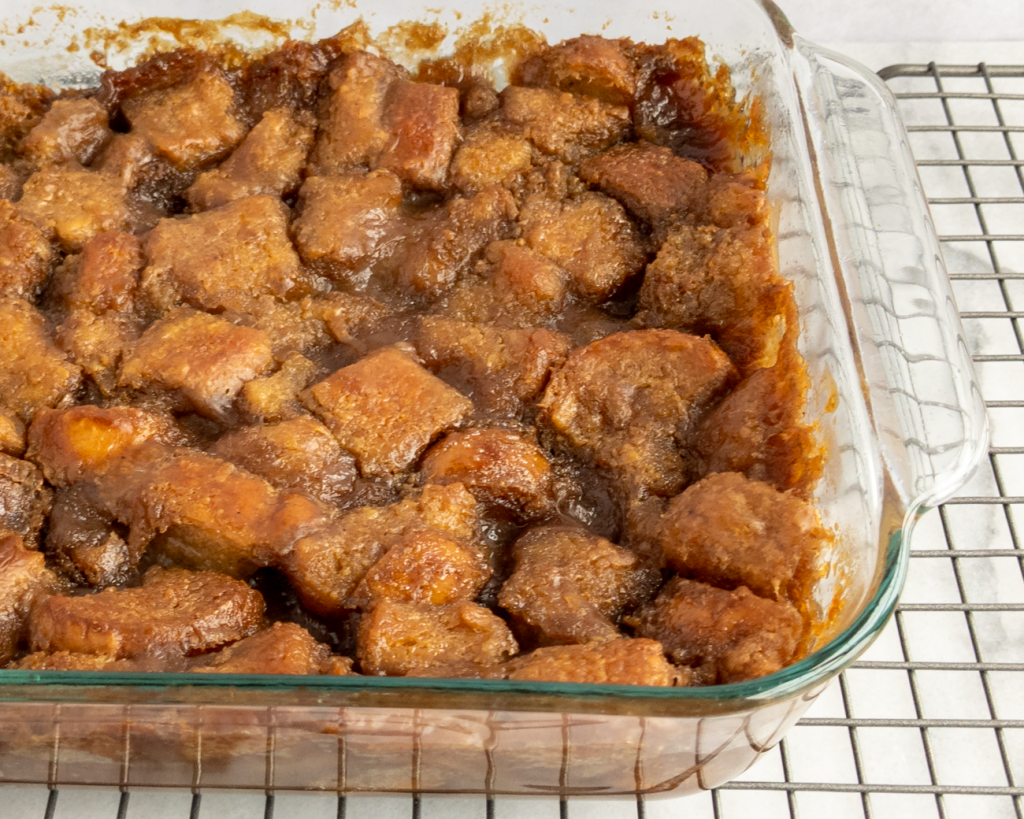 I hope you enjoy this recipe for vegan bread pudding!

Please let me know in the comments if you do, or if you have any variations to recommend to the other readers. And, as always, feel free to share the recipe if you love it! 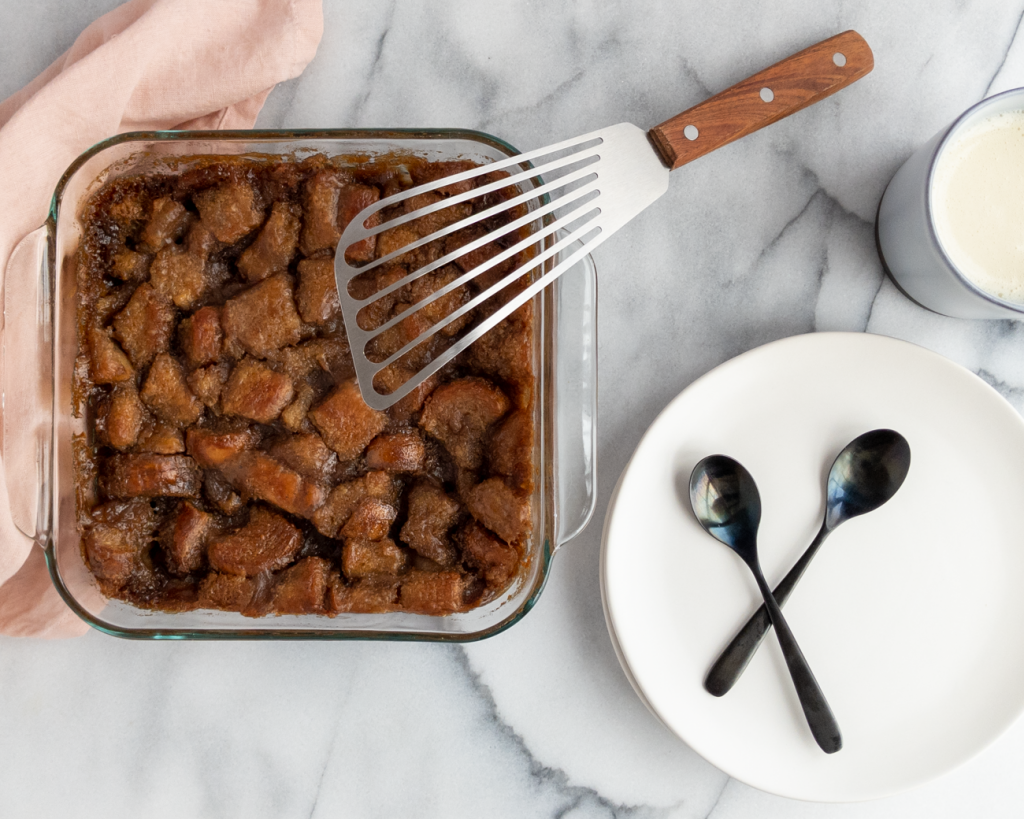 How can you make vegan bread pudding gluten-free?

To make this vegan bread pudding recipe gluten-free, you first need to start with a gluten-free loaf of bread. Since gluten-free bread tends to be a bit denser than wheat bread, try to give your bread pudding extra time to sit after it’s all mixed together (before you bake it).

Make sure the corn starch is certified gluten-free as well since it is sometimes made in the same factory as wheat products.

Can I make vegan bread pudding in advance?

Absolutely! In fact, I highly recommend it. The vegan bread pudding tastes best when you can prepare it the night before, and let the mixture sit in the fridge overnight. This gives the bread time to fully absorb all the vegan custard and makes the interior of the pudding extra soft and tender.

I don’t recommend preparing it more than a day in advance or trying to freeze it before baking. 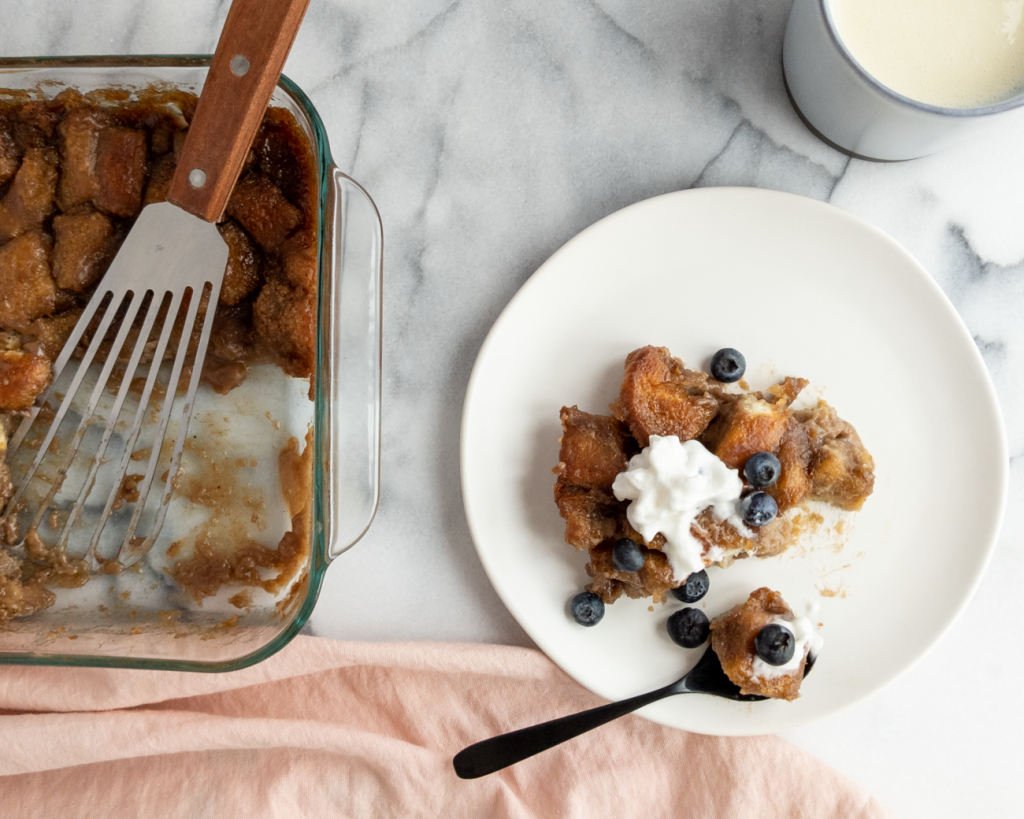 What kind of bread is best for bread pudding?

Old bread! As I’ve mentioned, you want stale bread that can soak up the pudding.

Okay, but are you curious about what type of bread is best? I love to use vegan challah bread, if you ever see some, and can manage to not eat it all immediately. Baguettes or any other freshly-made bread works fantastically, especially because they tend to not have any preservatives so they go stale quite quickly.

Honestly, this recipe works with any kind of bread. It’s typically made with white bread, but using a mix of dark and white bread creates a gorgeous variety when all baked together. Remember to give dense bread a bit of extra time soaking in the pudding before you bake. 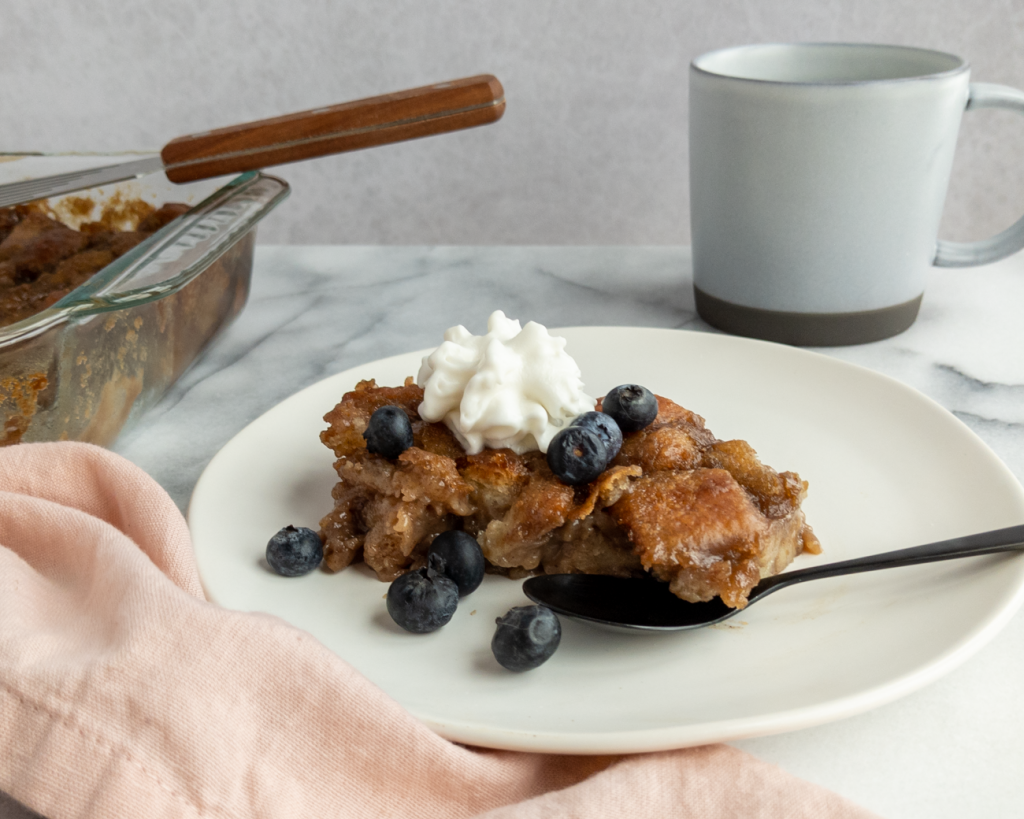 Ali is the former editor of Vegan HW and a graduate of L’Academie de Cuisine. She is the author of two cookbooks and her favorite vegetable is, believe it or not, the mighty pea. Check out her website to learn more about Ali!

We created Vegan Fest! to show others how easy it can be to make delicious and healthy vegan food without compromising taste. We want every reader to feel capable and inspired to create whatever style of recipe they desire.